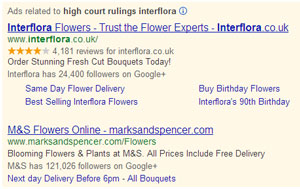 Oh, the irony!  A search for "high court rulings interflora" brings up a fine example of the very problem being debated (left).

Note: this image was taken today and may not be representative of any Ads examined in the case itself. If this image is representative, it seems pretty clear to me that the second Ad is for M&S; their website appears twice and M&S also three times...


This use of competitor trademark terms is not prohibited by AdWords Policies and the practice is quite common among advertisers.  It is therefore something of a shock to here today (21st May 2013) that the UK High Court has ruled in favour of Interflora and has ordered Marks & Spencer to pay damages.

This ruling, should it stand, is likely to have an enormous impact on the worldwide advertising community given that the practice is so common.  Perhaps more worryingly, parts of the judges ruling appears equally applicable to virtually any selection of Ads on a common theme:


“The average reasonably well-informed and reasonably observant internet user is not particularly technically literate, does not know precisely how AdWords operates and is not aware of the issues.”
He concluded that the “M&S advertisements which are the subject of Interflora’s claim did not enable reasonably well-informed and reasonably attentive internet users to ascertain whether the service referred to in the advertisements originated from [M&S or Interflora].
“On the contrary, as at 6 May 2008, a significant proportion of the consumers who searched for ‘interflora’ and the other signs, and then clicked on M&S’s advertisements displayed in response to those searches, were led to believe, incorrectly, that M&S’s flower delivery service was part of the Interflora network”.
It will be interesting to see if this ruling "sticks" and how it affects both Google's own Policies and the future of AdWords in general.